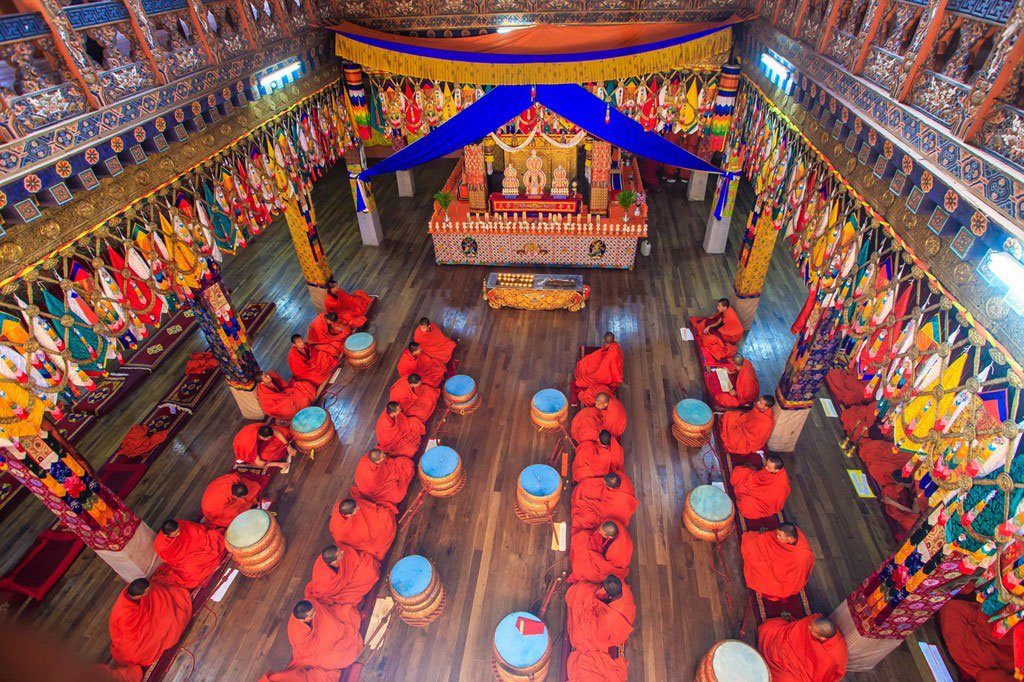 Bhutanese people can be generally categorized into three main ethnic groups. The Tshanglas, Ngalops and the Lhotshampas. The other minority groups are the Bumthaps and the Khengpas of Central Bhutan, the Kurtoeps in Lhuentse, the Brokpas and the Bramis of Merak and Sakteng in eastern Bhutan, the Doyas of Samtse and the Monpas of Rukha villages in Wangdue Phodrang. Together the multiethnic Bhutanese population number slightly more than 6,00,000. Tshanglas: The Tshanglas or the Sharchops as they are commonly known are considered the aboriginal inhabitants of eastern Bhutan. Tshanglas or the descendants of Lord Brahma as claimed by the historians speak Tshanglakha and are commonly inhabitants of Mongar, Trashigang, Trashi Yangtse, Pema Gasthel and Samdrup Jongkhar. Besides cultivation of maize, rice, wheat, barley and vegetables, the Tshanglas also rear domestic animals to supplement their living. Weaving is a popular occupation of women. They produce beautiful fabrics mainly of silk and raw silk.

Ngalops: The Ngalops who have settled mostly in the six regions of western Bhutan are of Tibetan origin. They speak Ngalopkha, the polished version of Dzongkha which is the national language of Bhutan. Agriculture is their main livelihood. They cultivate rice, wheat, barley, maize etc, among others. In the regions of Thimphu and Paro apple is also cultivated as cash crop. They are known for Lozeys, or ornamental speech and for Zheys, dances that are unique to the Ngalops.

Lhotshampas: The Lhotshampas who have settled in the southern foothills are the latest to settle in the country. It is generally agreed that they migrated from Nepal in the beginning of the 19th century mostly coming in as laborers. They speak Lhotshamkha which is the Nepali language and practice Hinduism. One can find various castes of Lhotshampas including Bhawans, Chhetris, Rai’s, Limbus, Tamangs, Gurungs, and the lepchas. They essentially depend on agriculture and cultivate cash crops such as like ginger, cardamom, oranges, etc.

The Bumthaps, Mangdeps and Khengpas: The people who speak Bumtapkha, Mangdepkha and khengkha respectively inhabit the central pockets of Bhutan. The Bumthaps cultivate buck wheat, potatoes and vegetables. A section of this population also rear yaks and sheep and produce fabrics of wool and yak hair. The Mangdeps depend on cultivation of rice, wheat, maize, vegetables, etc besides rearing domestic animals. The khengpas also depend on agriculture similar to the Mangdeps. However, they are also known for the bamboo and cane craft.

Kurtoeps: Kurtoeps are the other category of people in the east. They inhabit the district of Lhuentse and the villages are found spread along the banks of Kurichu. Khoma women are expert weavers and are known for their skill in weaving the grandiose Kushithara.

The Brokpas and the Bramis: The Brokpas and the Bramis are a semi nomadic community. They are settled in the two villages of Merak and Sakteng in eastern Bhutan. They mostly depend on yaks and sheep for livelihood. Living in the high altitude zones they hardly take up agriculture. They speak a different dialect and have their own unique dress that is made of yak hair and sheep wool. They are also experts in cane and bamboo crafts.

The Layaps: To the extreme north are the Layaps who speak the layapkha. Like the Brokpas, they are also semi nomads whose source of livelihood is dependent on yaks and sheep the products of which they barter with the people of Wangdue Phodrang and Punakha with rice, salt and other consumables.
The Doyas: These are the other tribal community and are settled mostly in southern Bhutan. They are considered the aboriginal inhabitants of western and central Bhutan, who over the years settled in the present areas in Dorokha. They have a dialect of their own and dress in their own unique style.

Monpas: The Monpas are a small community in Rukha under Wangdue Phodrang. Together with the Doyas they are also considered the original settlers of central Bhutan. They speak a different dialect unique to their own but one that is slowly ding as these people are now being absorbed into the main stream Bhutanese society.

The Bhutanese society is free of class or caste system and any inhibition that is detrimental for a society to progress. Slavery was abolished by the Third King Jigme Dorji Wangchuck in the early 1950s through a royal edict. Though, few organizations to empower women have been established a few years back, in general the Bhutanese have always been gender sensitive. In general ours is an open and a good-spirited society. Living in a Bhutanese society generally means understanding some basic norms like Driglam Namzha, the traditional etiquette. This is a norm that desires members of the society to conduct themselves in public places. Wearing a scarf when visiting a Dzong or an office, letting the elders and the monks serve themselves first, offering felicitation scarves during ceremonies such as marriages and promotions, greeting elders or senior officials are some simple manners that harmonizes and binds together the Bhutanese society.

Normally, greetings are limited to saying Kuzuzangpo amongst equals. For seniors and elders, the Bhutanese bow their head a bit and say kuzuzangpola. But, the western ways of shaking hands has become an accepted norm.

The Bhutanese are also fun-loving people. Dancing, singing, playing archery, stone pitching, partying, social gatherings etc. are common things that one observes. Visiting friends and relatives at any hour of the day without any advance notice or appointment clearly depicts the openness of the Bhutanese society.

Bhutan is a Buddhist country and people refer to it as the last stronghold of Vajrayana Buddhism. Buddhism was first introduced by the Indian Tantric master Guru Padmasambhava in the 8th century. Till then people by and large worshipped all forms of nature, remnants of which are still evident even today in some remote villages in the country. The older form of religion was referred to as Bon and was accompanied by offerings of animal sacrifice and worshipped a host of deities invoking and propitiating them. They believed in invisible forces and considered them as the rightful owners of different elements of nature. Mountain peaks considered as abodes of Guardian deities (Yul lha), the lakes as inhabited by lake deities (Tsho mem), cliffs resided by cliff deities (Tsen), land belonging to the subterranean deities (Lue), land inhabited by (Sabdag), water sources inhabited by water deities (Chu gi Lhamu), and dark places haunted by the demons (due) etc. 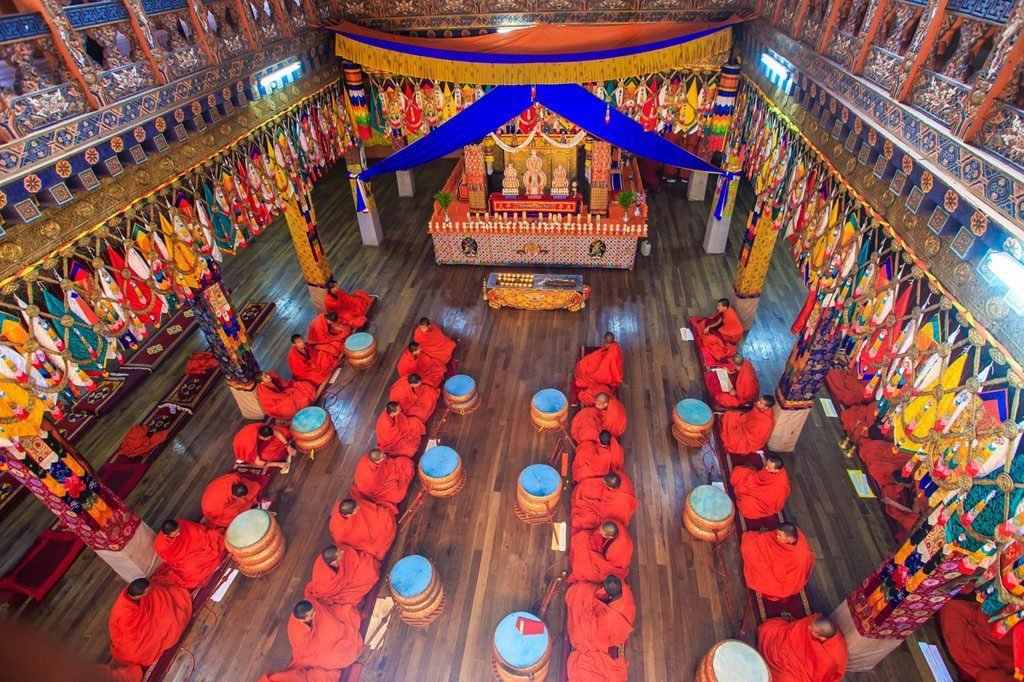 With the visit of Padmasambhava, Buddhism began to take firm roots and especially led to the propagation of the Nyingmapa (the ancient or the older) school of Buddhism.

The visit of Phajo Drugom Zhigpo’s from Ralung in Tibet to Bhutan in 1222 marks another milestone in the history of Bhutan and in Buddhism. He was instrumental in introducing yet another school of Buddhism – the Drukpa Kagyu that is today the state religion of the country. His sons and descendants were also instrumental in spreading it to many other parts in western Bhutan.
By far the greatest contributor was Zhabdrung Nawang Namgyal. His arrival in 1616 from Tibet marks another landmark. He was not only able to bring under his domain the various Buddhist schools that had cropped up in many parts of western Bhutan but unify the country as a one whole nation-state and give it a distinct identity.

Buddhism is still vibrant and alive. The Dzongs, monasteries, stupas, prayer flags, and prayer wheels punctuate the Bhutanese landscape. The chime of ritual bells, sound of gongs, people circumambulating temples and stupas, fluttering prayer flags, red robed monks conducting rituals, among many others are all living case in point to reveal that Buddhism is an essential ingredient of a Bhutanese life. Though referred to as the last Vajrayana Buddhist country, yet one may still come across animistic traditions and beliefs being practiced by the people. Nature worship and animal sacrifice are still a part of the Bhutanese worship. Every village has a local priest or a shaman to preside over the rituals. Some of the common nature worship being practiced are the Cha festival in Kurtoe, the Kharphud in Mongar and Zhemgang, the Bala Bongko in Wangdue Phodrang, the Lombas of the Haaps and the Parops, the Jomo Solkha of the Brokpas, the Kharam amongst the Tshanglas and the Devi Puja amongst our southern community. All these shamanistic rituals are being performed to keep at bay the evil spirits, to bring in prosperity, to cure a patient, or to welcome a new year. In all of these rituals a common feature is the offering of animals ranging from slaughter of an ox, fish a chicken or a goat.