Bumthang is one of the most beautiful and sacred valleys in Bhutan. Bumthang is divided into four gewogs, namely Chhoekhor, Tang, Chhume and Ura. Choekhor is the largest of the four and is widely considered as ‘Bumthang Valley’. The valleys are broad and gentle carved by the ancient glaciers. The wide and scenic valleys draws a large number of tourists each year.

Bumthang means ‘the plain shaped like a bumpa’, a bumpa being an oblong-shaped holy water vase. The religious connotation of the name aptly applies to the sacred character of the region. It would be difficult to find so many important temples and monasteries in such a small area anywhere else in Bhutan. According to tradition, Bumthang was one of the valleys where theTibetan King, Songtsen Gampo (7th c.), chose to erect the temple, Jampa Lhakhang, one of 108 Buddhist temples that he is said to have built all over the Himalayan world.

This region that spans from 2,600-4,500 m is the religious heartland of the nation and home to some of its oldest Buddhist temples and monasteries. Tales of Guru Padmasambhava and the tertons (“religious treasure-discoverers”) still linger in this sacred region.

This dzongkhag is one of the most richly endowed districts in terms of historical and spiritual legacy. Some of Bhutan’s oldest and most venerated temples are found in Bumthang, including Jambey Lhakhang. According to legend this ancient temple was built by the Tibetan king Songtsen Gampo in 659 A.D. as part of a chain of 108 simultaneously constructed temples in order to subdue an evil demoness that lay over the Himalayan region. It is the oldest lhakhang in Bhutan. There are numerous other temples and shrines worth visiting in Bumthang and many of them are linked to Guru Rinpoche’s visit in 746 A.D.

The fertile valleys of Bumthang are covered in fields of buckwheat, rice and potatoes. Apple orchards and dairy farms are also common sights here. This serene region is one of the most peaceful places in the kingdom. 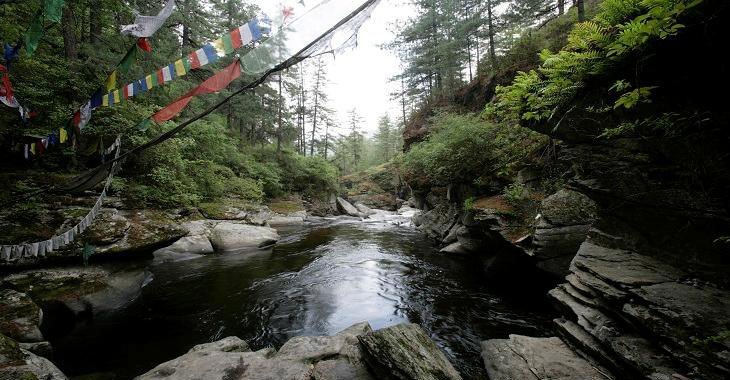 The Burning Lake, Mebar Tsho is located along the way to the Tang village over the feeder road under Bumthang valley.  It takes approximately thirty minutes drive to the Mebar Tsho from Chamkhar town.

Mebar Tsho is considered one of the most sacred sites in the region as it is related to the renowned religious treasure reveler (Terton) Terton Pema Lingpa.  Pema Lingpa is considered an incarnated disciple of Padmasambhava who discovered treasure within the lake in late 15th century.

Today this small fresh water lake is a sacred pilgrimage site for the Bhutanese with bright multicolored prayer flags surrounding it and a small altar dedicated to Terton Pema Lingpa has also been set up. On auspicious days people offer butter lamps at the lake. Many tourist visit the site to observe spectacular beauty of this important historical and religious site. 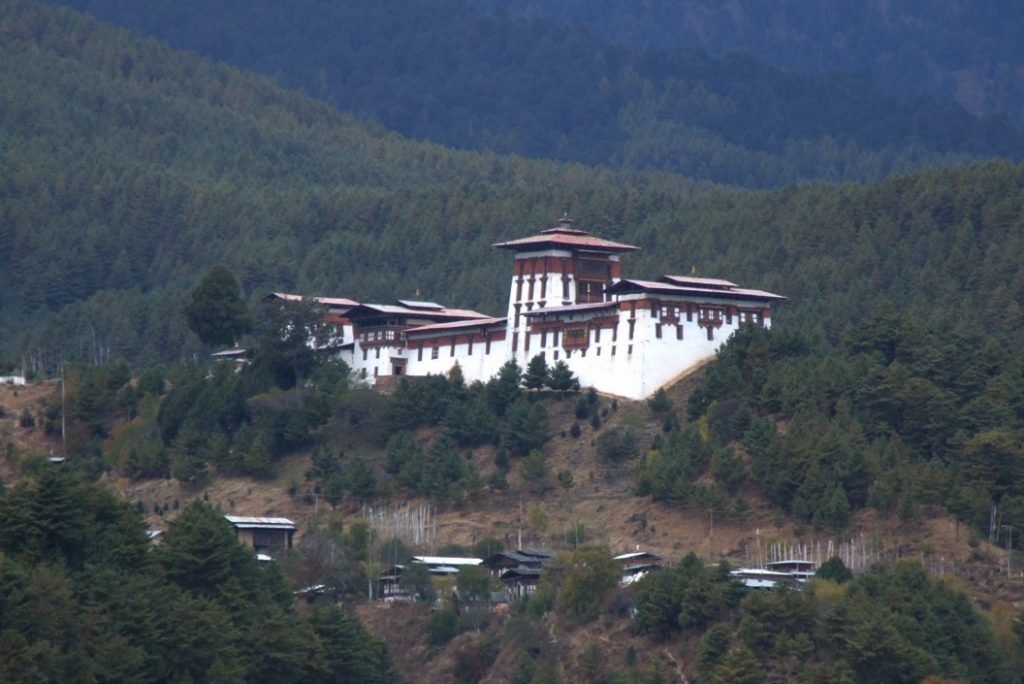 The Jakar Dzong or the “Castle of the White Bird” dominates the Chamkhar valley and overlooks the town. Constructed in 1549, by the Tibetan Lam Nagi Wangchuk, the Dzong played an important role as the fortress of defense of the whole eastern Dzongkhags. It also became the seat of the first king of Bhutan.

A special feature of the Dzong is the approximately fifty meter high Utse or the Central tower, which is distinct from most other Dzongs in Bhutan. The other unique feature of the Dzong is a sheltered passage, with two parallel walls, interconnected by fortified towers, which gave the population of the fortress access to water in the case of a siege. The protected water supply is still intact to this day. 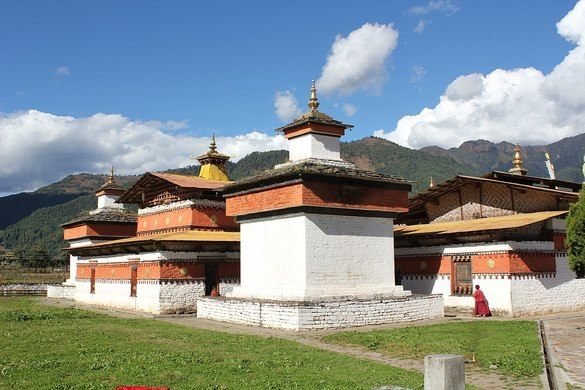 Jambay Lhakhang is one of the oldest temples in the kingdom. It was founded by, Songtsen Gampo, a Tibetan King in the 7th century AD.  The king was destined to build 108 temples known as Thadhul- Yangdhul (temples on and across the border) in a day to subdue the demoness that was residing in the Himalayas. The temple is one of the two of the 108 built in Bhutan. A second is located in Paro, the Kichu lhakhang also built on the same day.

According to legend, this temple was built to pin down the body of a demoness who lay across the Himalayas.

Legend has it that Guru Rimpoche visited the site several times and deemed it exceptionally sacred. Chakhar Gyab, the king of the Iron Castle of Bumthang renovated the temple in the 8th century AD.

The first king of Bhutan,  Gongsa Ugyen Wangchuck constructed the Dus Kyi Khorlo (Kala Chakra- Wheel of Time) inside the temple, to commemorate his victory over his rivals Phuntsho Dorji of Punakha and Alu Dorji of Thimphu after the battle of Changlimithang in 1885. Later, Ashi Wangmo, the younger sister of the second king of Bhutan, built the Chorten lhakhang.

The main relics include the future Buddha, Jowo Jampa (Maitreya) from whose name the present name of the temple is derived. The lhakhang also houses more than one hundred statues of the gods of Kalachakra built by the first king, in 1887. It is located on a bend of the Lateral Road at the border of Bumthang District (Ura Gewog, leaving Ura southbound) and Mongar District (Saling Gewog, toward Sengor), along the border with Lhuntse District to the east. The Lateral Road bisects Thrumshingla National Park, named after the pass. The World Wildlife Fund also maintains operations in the park. The route crosses Ura la pass (3,600m) with a magnificent view of Mount. Gangkhar Puensum. Villages in Ura have clustered houses, which is quite unusual in Bhutan. Above Ura village (3,100m) is a new temple dedicated to Guru Rinpoche. Inaugurated in 1986, it contains a huge statue of the master and remarkable paintings of the cycle of his teachings. Since last 25 years Ura has been transformed from a marginal community to prosperous valley. 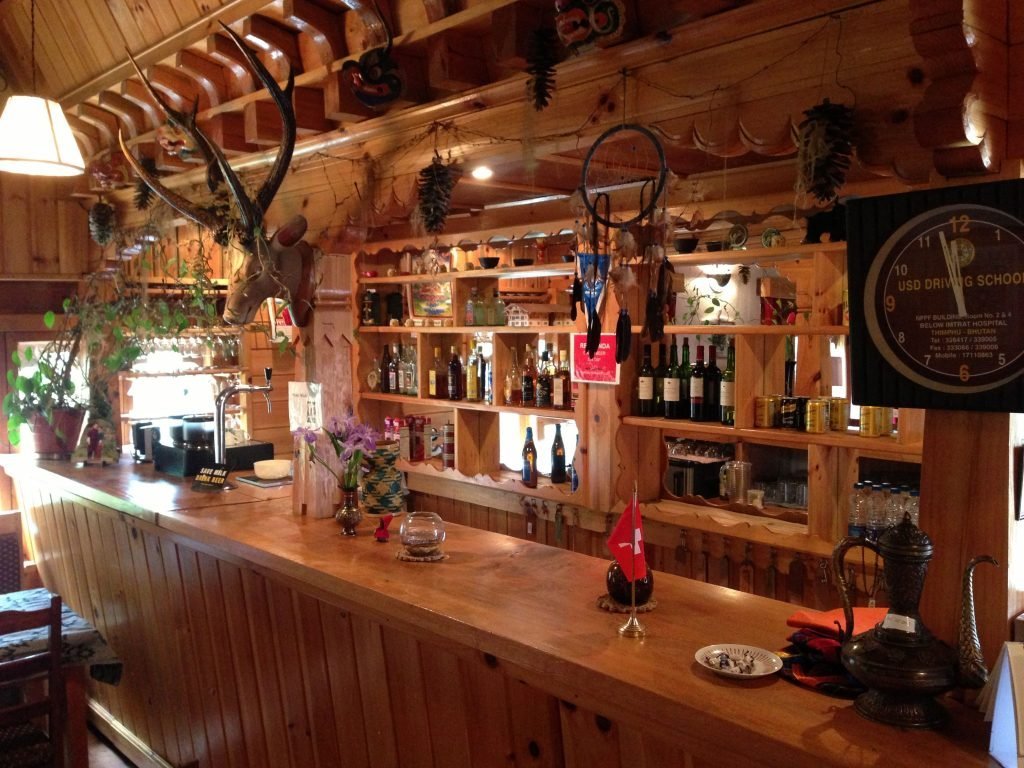 Located further in the northern side of Bhutan, Bumthang Brewery is sited amidst the luxuriant land of beautiful fields. The brewery is not only famous for being the first and sole microbrewery but it also unique because of its owner Frits Maurer. Fritz Maurer has quite a history as being the first foreigner able to travel to Bhutan after being invited by the king. With his support of introducing brown Swiss cows in the country, Bhutanese people saw a gradual increase in the production of milk. He has the rare honor of being a Bhutanese citizen, even though he was born in Switzerland. After getting married with a local of Bumthang valley, he set up his own brewery and at the present time it is run by his son. At Bumthang Brewery only 3000 bottle of Red Panda Beer are produced per month and are recycled backed in production. The beer is brewed in the old school way in small batches, and carefully observed every step of the way during cooking, cooling, and fermentation. Each bottle is individually filled, capped, and labeled. When you visit, for only five dollars you get both the brewery tour and your own bottle. Seeing the whole process in Bumthang Brewery can be quite fascinating experience like seeing being in an episode of food factory. The brewery is really small but the visit can be worth an astounding memory to cherish life time. Witness the whole beer making process while taking few unfiltered and preservative free local beer bottles as souvenir. Bumthang Brewery with its luxuriant garden, where bees can be seen busily collecting pollen, along with the conjoined cheese shop, where one can find chilly free cheese, and local beer is a must visit place while unraveling the grandiose and mystical dzongs of Bumthang. 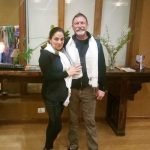 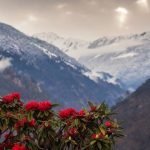